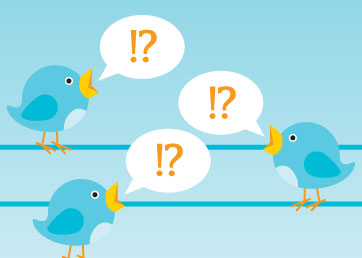 Twitter has been around since 2006, and I posted my first tweet early on in 2007. It wasn’t earth shattering, but I did handle the new idea of Twitter with elegance and sagacity, and got my point across in a mere 16 characters:

I first wrote about Twitter here in this blog back in 2008 and shared my thoughts about using the unique and unusual functionality.

Today I’m mentioning one basic piece of Twiter’s functionality that so many people still don’t get.

Here’s an example: I have something to get off my chest, and it’s something I want everyone to know, including my friend to whom the tweet references. So I tweet this:

@halfeldman you’ve got a lot of nerve being so smug about the warm Miami weather in the middle of January!

However, there’s a problem, I want everybody to know, but because the tweet STARTED with an @ sign only the people who follow BOTH me (silvermarc) AND halfeldman will see this tweet, not all of my followers.

This is good in some cases, but not this one. I want everyone to know how much I love the freezing New York weather and how Miami Hal’s Florida warmth isn’t bothering me at all…

So, @halfeldman thinks his January Miami weather is better than the beautiful ice and snow and cold temperatures here in New York?

Why does this reach everyone? Because the @ is not the first character of the tweet. In this case, all of my followers see it no matter what else is in the tweet.

@williesanchez has decided to run in the upcoming New York Marathon. Go Willie!

Again, this is only going to a very limited number of my followers who ALSO follow williesanchez.

No good, everyone must see this:

See that period at the beginning? That . can be the most misunderstood piece of punctuation on Twitter.

Now that my tweet starts with a period, ALL of my followers can understand how much I support Willie in his quest for a new car!

Clearly this is a really important mechanic. And Twitter hasn’t done a good job explaining it to new users. Perhaps a simple instruction would be helpful: Incidentally, I don’t think that simply using the period at the start is the most elegant way to achieve this goal, as long as the @ character isn’t the first character, your tweet will find a larger audience.

This looks and feels more natural.

So if you absolutely have to start a tweet with someone’s handle, now you know how to do it without limiting your reach.

(Thanks to Gary Vaynerchuk for calling attention to this little anomaly!)